The Gut Microbiome and its Effects on Human Health

The human body is capable of wondrous phenomena. Our white blood cells help heal cuts and wounds, our salivary enzymes help break down foods, and our gut microbiome helps us digest nutrients. But did you know that our bodies contain more microbes than human cells? With over a quadrillion microbes in and on our bodies, these microscopic organisms play a significant role in our health—both positively and negatively. In this blog, we dig deeper into the composition of the human gut microbiome, its functions, and its benefits. 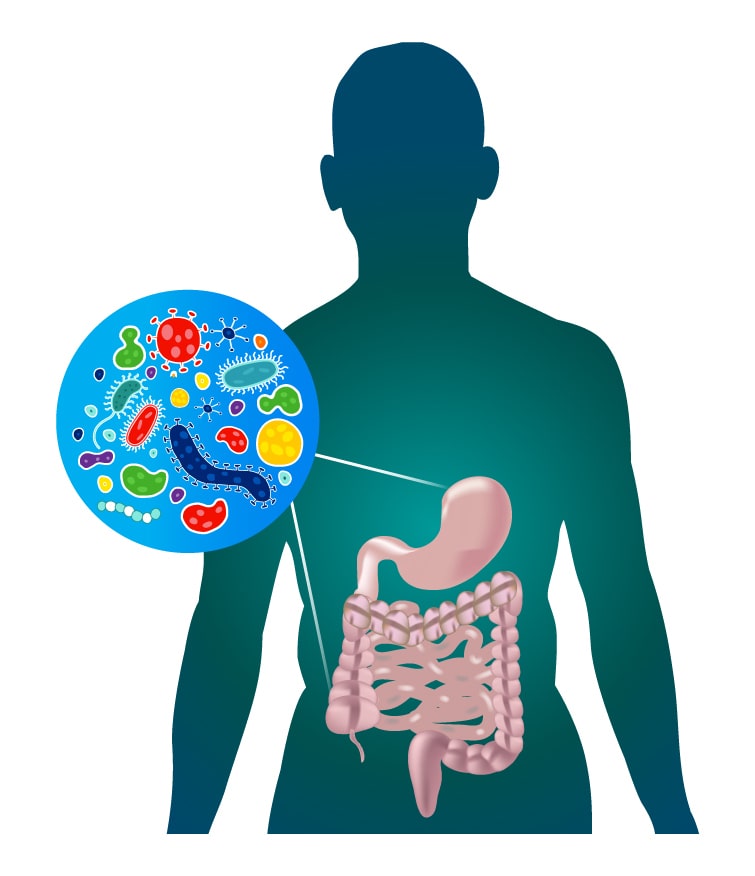 The human gastrointestinal tract (GIT) is composed of a variety of organs, each with varying internal environments. One of the main components of the GIT is the stomach, which is an acidic, aerobic environment. The stomach connects to the small intestine, which in turn connects to the large intestine, and both are lined with thick mucosal layers. Within these environments, around one quadrillion microbes live and thrive; collectively, they are referred to as the gut microbiome. These microbes consist of bacteria, viruses, protozoa, archaea and eukaryotes and most of them live in the stomach (1). Bacteria make up a significant proportion of the gut microbiome and our stomach contains more than 100 bacterial species belonging to 7-13 bacterial families. The identity of these bacterial families can be analyzed based on nucleic acids purified from fecal samples or tissue biopsies, which is an area of research called metagenomics (2). Metagenomics relies on DNA sequencing of the 16S rRNA gene and comparing these sequences to determine the diversity of microbes in our gut. The 16S rRNA is the RNA component of the 30S subunit of the ribosome that is responsible for protein synthesis in prokaryotes. It is commonly used in determining bacterial species because of its high degree of conservation across different strains belonging to the same bacterial species (3). 16S rRNA sequencing analyses have shown that there are four prominent bacterial families in our guts, which are Bacteroidetes, Firmicutes, Proteobacteria and Actinobacteria (4).

These phyla of bacteria usually enter the human body at an early age through vaginal birth, C-section birth, consumption of milk and solid food (except for Bacteroidetes which are not inherited through breast milk, and Proteobacteria which is not acquired through eating solid food) (6).

Functions and Benefits of the Microbiome

The families of bacteria mentioned above have a symbiotic relationship with us. They rely on our unused metabolic products for their own metabolism and, in turn, provide us with a myriad of benefits that are essential for optimal human health.

Some of these benefits include microbial metabolomics, intestinal shape, and immune system maturation.

Recently, the study of chemical microbial products has grown into a field of research called microbial metabolomics. Intestinal microbiota produce a variety of compounds that are used by the body in biochemical reactions. Examples of these compounds include acetate and propionate, which are products of microbial fermentation (7). Acetate is used in the formation of lipids, which are necessary for cell wall formation. Propionate is used by our cells for making glucose, which is one of the main energy sources that our cells rely on for their function. Other well known microbial products include lactic acid and vitamin K2 (8). Lactic acid production is the product of the digestion of lactose which is acquired from milk. Escherichia coli is needed for the digestion of the lactose sugar in infants, as our bodies can’t digest lactose on its own. Vitamin K2 plays an important role in blood clotting to help prevent excessive bleeding in the case of an injury. All of these microbial products, along with many others, are essential in maintaining good health.

The gut microbiota may influence the shape and function of the intestines in the digestion and absorption of nutrients. For example, it was found that microbe-free mice have a misshapen inner lining of the intestine and reduced lower digestive enzyme activity. The mammalian intestine has an inner lining with a wrinkled appearance composed of lumina that are regularly spaced and each cell in the lumen has hair-like projections called villi. The regular arrangement of the lumina and the villi maximize the absorption of nutrients by the intestine. However, microbe-free mice were found to contain thinner villi than normal and irregularly spaced lumina. These differences decrease the ability of the intestine to absorb nutrients (8) .

Another benefit that our gut microbiota provides us with was revealed by an examination of the T-helper 17 (Th-17) cells in microbe-free mice. A study conducted more than 10 years ago found that Segmented Filamentous Bacteria are needed for the formation of Th-17 cells (8). Th-17 cells are a type of white blood cell that causes other components of the immune system to react and eliminate an infectious pathogen.

The activity and abundance of gut microbiomes have numerous medical benefits to us because of their roles in inhibiting pathogenic infections and acting as markers for human health.

Our gut microbiota resists pathogens through two primary means: direct interaction with pathogens, or inducing our immune system to eliminate the pathogens. The direct interactions with pathogens includes producing metabolic products that inhibit the growth of pathogens or their ability to invade our cells. Moreover, some gut bacteria produce antibiotics to kill pathogenic bacteria. As for stimulating our own immune system to attack pathogens, gut bacteria can induce intestinal cells to produce antimicrobial peptides, called defensins, and antibodies for pathogen elimination (1).

The abundance of different species of microbes in the gut is influenced by dietary uptake, and may provide insights into associated medical conditions such as obesity. For example, it is thought that Firmicutes are associated with eating a fat-rich diet because they are highly effective at uptake of calories, which can lead to insulin resistance and obesity (8,9). On the other hand, the high abundance of Bacteroidetes is associated with a fiber-rich diet (10). The relative abundance of Firmicutes and Bacteroidetes is indicative of dietary health and some researchers use the Firmicutes/Bacteroidetes ratio to indicate the likelihood of obesity (8). 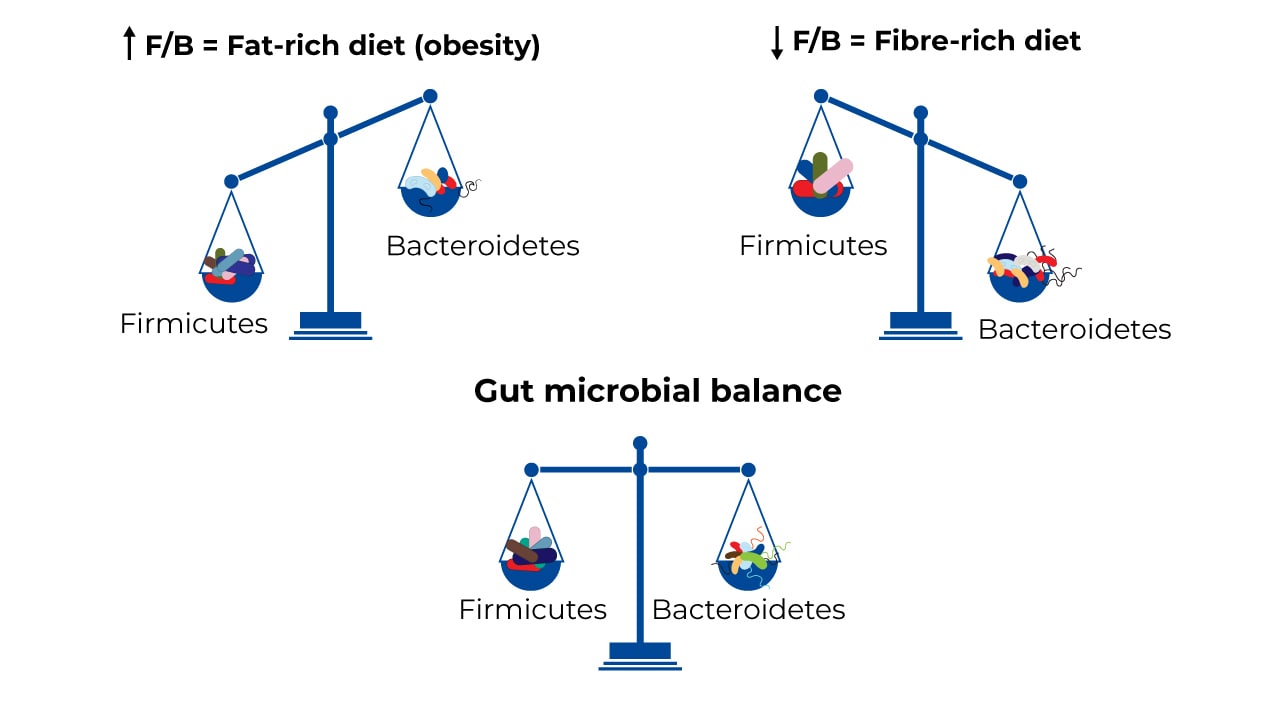 The human gut microbiome is a large collection of symbiotic microbes totalling over a quadrillion cells and more than 100 bacterial species. The symbiotic relationship that we have with our microbiota provide us with a multitude of benefits for our metabolism, digestion, immune system, and dietary health. Microbiome research is imperative to learning more about human health as it can provide scientists with a deeper understanding of the basis of disease, the ways an individual responds to cancer therapies, future insights for preventative care, and much more.